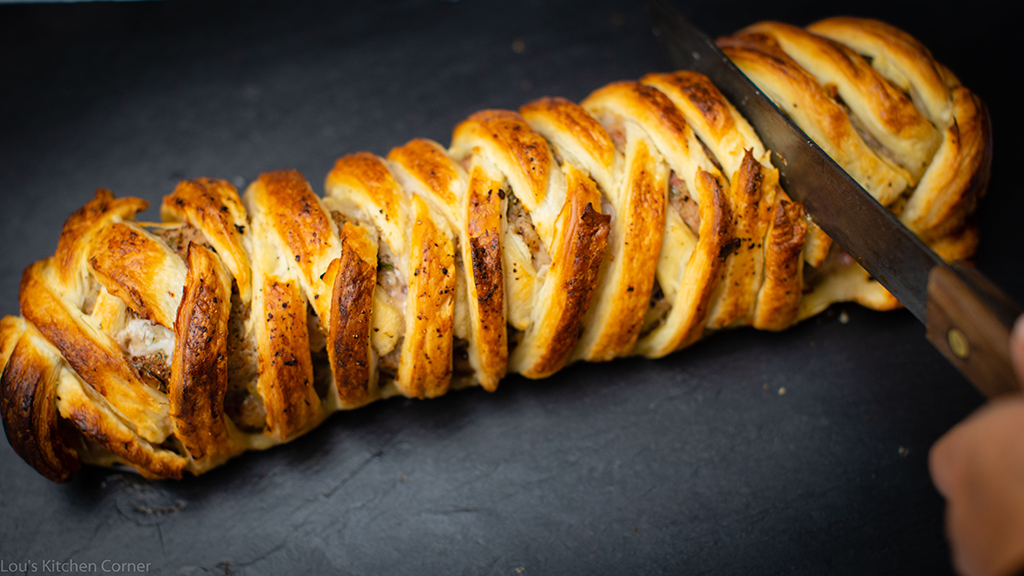 Who doesn’t need one of these in their lives?

Great for picnics, much like the classic scotch egg.

They can be served hot or served cold.

And usually come in mini and normal size.

But this week I’ve gone and upscaled this little, savoury snack… to gigantic.

I found this recipe from Delicious magazine and thought it would be just a bit of fun.

But it turned out to be even better and more logical than I anticipated.

Apart from it being super easy to make.

And lovely and tasty.

We ended up having it as a little starter snack when friends came over for a long lunch.

I had just made it and the smells got to them so much so, they wanted to have a little taster.

It was a winner and started off the long lunch rather well.

And guess what, we had loads left because it’s gigantic!

Even my 16yr old teenage step-son totally fell in love with the idea of a huge sausage roll.

And why wouldn’t he?

He immediately could see the benefit of this monster as a snack that keeps on giving.

Who invented the sausage roll?

It wasn’t the Brits.

As commonly thought… by the Brits.

But they do love a sausage roll (as do the Kiwi’s and Aussies).

And according to The Guardian, Greggs bakery chain sells 2.5 million sausage rolls a week.

However, food historians say it dates back to Ancient Greek and Roman times when wrapping meat in pastry began.

In the early 1800s is when they started to grow in popularity in London.

As they were great cheap street food.

But don’t mention that to the American’s when Brits are nearby.

Back in 2017, Trader Joe’s announced they ‘invented’ the sausage roll.

And called it ‘puff dog’.

Which caused an outcry from Brits on social media.

Originally, they were made using shortcrust pastry.

An interesting aside; puff pastry was developed in the early 1600s in Spain.

It was an adaptation of the Middle Eastern filo pastry used in baklava.

It then quickly spread across Europe, made it to French baking around the 1650s.

Sausage meat and flavours vary around the UK.

Depending on which region, you can have different herbs and spices.

But the most common flavours used in pork sausagemeat is pepper, sage, thyme and nutmeg.

And in this recipe for the gigantic sausage roll, I’m using onions, sage and mushrooms.

But as Toby said to me, once he tasted it, perhaps some bacon nuggets would be a nice addition.

I can’t argue with that.

Try it out, it’s a fantastic snack that lasts.

And a fun one to make with kids.

I picked this tip up from Jamie Oliver when he demonstrated making a Beef Wellington.

To avoid a soggy bottom, pop the baking tray over a hob on medium-high to cook the pastry bottom for a few minutes i.e. just before you place it in the oven to cook.

If you try any other flavours, leave a comment… 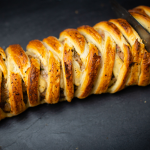 TOP TIP: Avoid a soggy bottom! Once it’s on the oven tray (before you place in the oven), pop the tray over a hob on medium-high to cook the pastry bottom for a few minutes.