I think everyone has fond childhood memories of the classic scotch egg.

I always had one packed in my lunch at least once a week during Primary school.

And it was always a complete mystery to me how Mum managed to get the egg inside the meat casing.

She was a bloody magician!

Fast-forward to London, now a ‘grown-up’, I discovered scotch eggs had a resurgence.

But what took me by complete surprise was the day I went to a new Peckham Rye market.

Where I decided to kill my hunger pangs with a cheeky little scotch egg.

When did this simple, Primary school treat suddenly become a luxury item?

I was not impressed and went straight to Lidl’s to find a sticky-bun for 50p.

So where did the Scotch egg come from?

Not Scotland, if that’s what you were wondering.

From the research I’ve done, no one really knows where they originated.

But there are certainly a number of good stories which are out there.

One version claims the Scotch egg was the northern version of a Cornish pasty.

Easily transportable lunches, just like the pasty, for the working class.

The opposite version to this, is that it came from Fortnum and Mason; a luxury London department store.

They laid claim to the Scotch egg in 1738 as a luxury snack for the upper class.

They could eat a Scotch egg as they travelled out to their country homes (nice for some ;).

Nowadays, they have definitely reached gourmet standards with all sorts of flavours… and often a mighty price tag.

But they’re still a firm favourite of mine and my family as a snack and a great picnic addition.

The word ‘picnic’ seemed to come about in the 17th-century from a French word.

It’s meaning; to describe a group of people dining in a restaurant who brought their own wine.

Which then (somehow) become to mean a meal that everyone contributed to.

It was then in the mid-1800s, that the picnic became a common English word.

And they become a favourite pastime of the aristocracy.

With their summer–society-season which seemed to revolve around picnicking.

I don’t have a summer-society-season but I guess we’re pretty social.

And we do love a picnic to go off and enjoy in a London park or a beach in South Devon.

We also pack a Scotch egg when we set off on a long journey to visit family.

So, I now know the secret to Mum’s wizardry of getting the egg in the middle.

Why not give it a go yourself… it’s simple and of course, impressive. 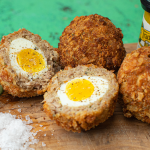