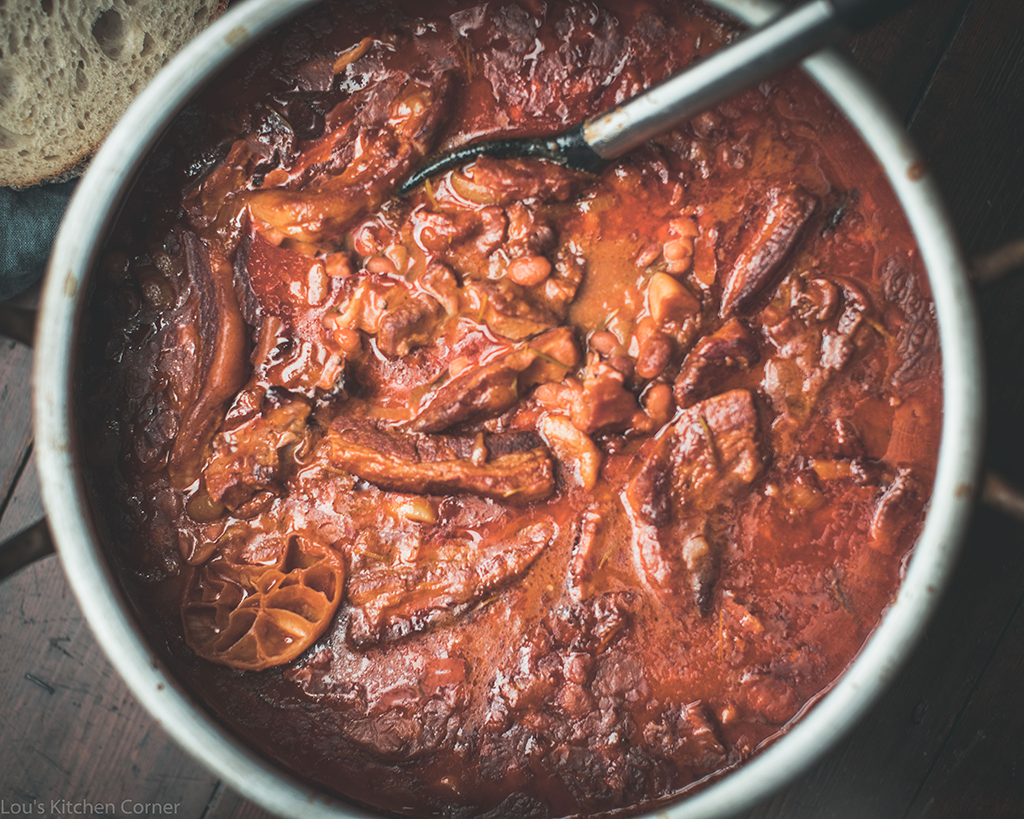 This slow-cooked pork in beans & smoked bacon is good for the soul.

I’ve had a week of culture.

Since we can’t travel these days without PCR tests, lateral flow tests, quarantine hotel, the list goes on…

We decided to spend a few days in London Town.

And get a good dose of culture.

But I can tell you, it’s exhausting.

Not only were my feet sore from all the walking.

But I frazzled my brain a little absorbing all this highbrow tourism.

I say ‘highbrow’ but some of it was pretty brutal and terrifying.

Like learning about London’s infamous Newgate prison during a tour of the Old Bailey.

So, if you decide to do a day or two of culture somewhere, my two tips are:

This is why I’m introducing you to this hearty, slow-cooked pork in beans & smoked bacon.

But before I let you delve into the recipe.

I thought I’d share some of the more interesting (sometimes gruesome) facts of London’s criminal and justice system from over 700 yrs ago.

The name alone would send a chill through the heart of any Londoner.

It was a terrifying place.

And was the most notorious prison in London was built in the 12th century by order of King Henry II.

It sat in the City of London (behind St Paul’s Cathedral).

(and some not so wicked but very unfortunate).

From thieves to highwaymen, to cutthroats and murderers.

Newgate grew in notoriety in 1782, when they moved London’s public gallows here from the Tyburn Tree  (corner of Oxford St and Hyde Park).

This was to help control the immense crowds that gathered for public executions.

They took place outside the prison walls on the Old Bailey Road.

The Central Criminal Court (a.k.a. The Old Bailey) now stands on the site of the old Newgate Prison.

And actually has part of the old Roman wall used as a low bearing structure for the Old Bailey.

There were 5 and they were set up for specific types of crimes:

A little lightness in the darkness

Tim and I were lucky enough to have a tour of the Old Bailey with the City of London’s Sheriff.

And discover many intriguing, gruesome stories about Newgate prison.

(NB: the Sheriff is an annually elected official who supports the Lord Mayor with their civic duties and ‘runs’ the Old Bailey).

And although most of his stories were fairly unhappy tales.

He did share one story of the inventor of the toothbrush, William Addis.

In 1770, William Addis was thrown into Newgate prison for inciting riots.

He couldn’t pay to get out of prison so during his time.

So, the story goes that Addis whittled holes into a pig bone leftover from his dinner.

Then threaded them with bristles from a nearby broom… and created his toothbrush prototype.

Setting up a company called Wisdom Toothbrush which is still going to this day.

Food was not something that was high on the list of priorities to provide to those thrown into Newgate prison.

Most prisoners under sentence of death were kept shackled.

They were fed on bread and water for the final 2-3 days of their miserable lives before being hanged.

So, a big bowl of slow-cooked pork on lovingly cooked beans… was a no go.

So we should count out lucky stars that we weren’t born back in the days of Newgate prison.

And open up the fridge, get out these simple ingredients and start cooking this soul-warming dish.

Then sit around your table and enjoy it with friends and family … without any shackles.

PS. if you want another classic slow-cooked beans recipe.

Then make sure you take a look at slow-braised oxtail with pit beans.