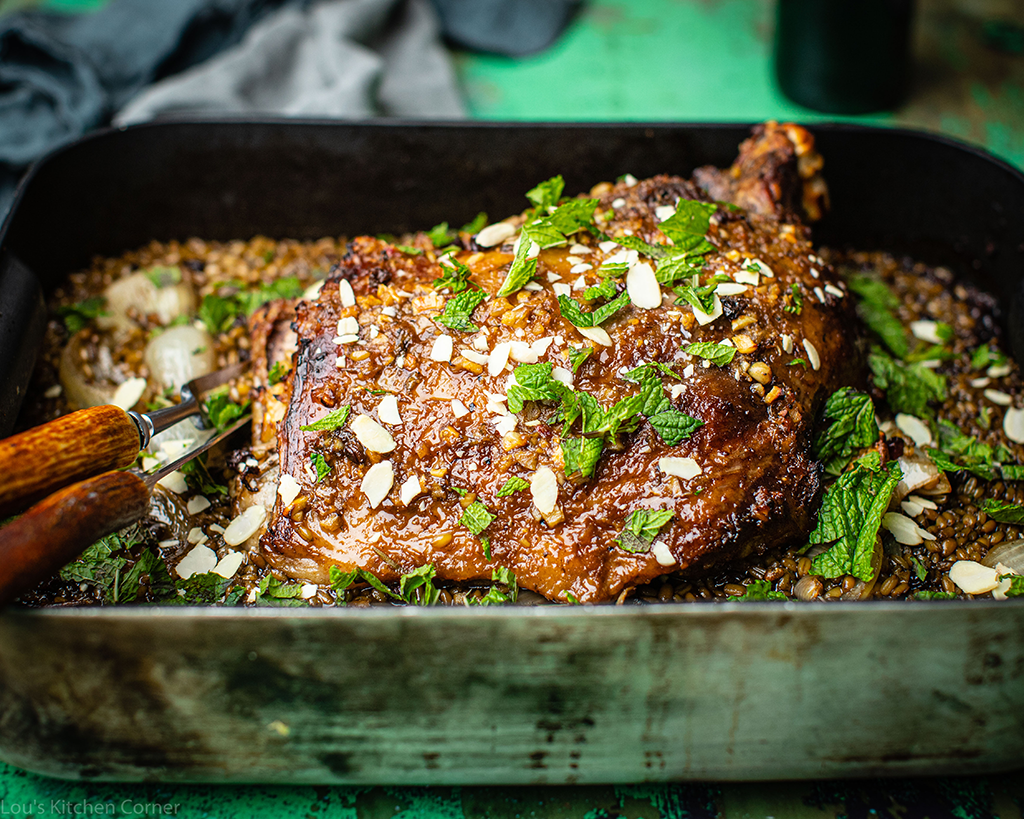 Moroccan-spiced lamb shoulder with onions and freekeh. Do I need to continue?

Just the sound of Moroccan spices on lamb is enough for me.

And this dish is truly spectacular and will be a hit on any dinner table, or as a Sunday roast.

But I’ll tell you now, there’s a little bit of work involved but nothing complicated.

It’s just combining both the roast and braise method that means a tiny bit more work.

However, it’s worth it.

Wine pairing: This was a lovely pairing from Michael Sutton’s Cellar; a Cabernet Sauvignon blend, the Massaya Le Colombier Lebanon 2018 is full of fruit with notes of dried fig.

It’s quite pricey at around £15 but worth it.

In 2020, we had our first trip to Morocco planned.

And I couldn’t wait!

I was excited as much about the markets, mountains, desserts.

As I was about the people, the food and the spices.

But sadly, due to Covid, we had to cancel it.

Hopefully, we will visit when things get under control.

But the spice history is fascinating, goes way back and is a vibrant tapestry of people, languages, and traditions.

Over centuries, many different nations settled in Morocco.

Which meant different cultures shaped Morocco and influenced its cuisine.

Before the Muslim Empire in the 8th century, the Berbers were the dominant ethnic group in Saharan Africa.

And the Berbers used local ingredients such as olives, figs, and dates to prepare lamb and poultry stews.

By the 8th century, the Arabs arrived (invaded) in Morocco.

They brought the teachings of Islam and the Christian Berbers converted into Muslims.

The Arabs not only influenced Morocco’s culture dramatically.

But also Moroccan cuisine was also influenced by the introduction of grains and bread.

PLUS they also brought in spices such as ginger, cinnamon, saffron, cumin, and caraway.

Due to Morocco’s geographical location, the Moors, (Muslim inhabitants mainly based in the Iberian Peninsula in the 8th century) from Spain had a strong impact on Moroccan cuisine.

They encouraged the use of olives and olive oil and the start of citrus gardens and fruit-bearing trees.

During the 7th and 8th centuries, the Jewish people started to migrate to North Africa.

But after the 2nd World War, many Jews left Morocco for Israel.

So, although there are fewer Jews living in Morocco they still influenced Moroccan cuisine.

And that came in the form of pickling and preservation techniques for fruits and vegetables, including olives, citrus, and carrots.

Needless to say, Morocco has an incredibly rich (complex) history.

Which has resulted in major food influences and cooking techniques over the centuries.

And although not Moroccan specific, in this recipe we’re trying 2 techniques; roasting and braising.

But what is the difference?

Right, so as mentioned, this recipe calls for roasting and braising.

And both methods are ideal for cooking tougher cuts of meat.

Which are often cheaper so they require a little more love to draw out their true flavoursome potential.

So, what’s it all about and what’s the difference?

(hint: It’s all in the amount of liquid 😉

Braising is a method that relies upon both wet and dry techniques.

The meat is usually seared in a very hot pan.

And then placed in the oven with liquid at a low temperature.

I love low and slow as it makes cheaper cuts of meat melt-in-your-mouth.

And dissolves collagen to get gelatin.

Which helps thickens the sauce and adds incredible flavour.

When braising, you need a deep dish with a lid that’s both stovetop and oven-proof.

I’m pretty sure you know what roasting is but here goes.

The temperature is usually high.

A lot of the flavour comes from the caramelization or browning of the meat.

And basting throughout increases the flavour.

If you love a Sunday roast then you know how to roast!

I have learnt a lot about using herbs and spices over my cooking journey.

Which go back to my old flatmates from many (ok, many, many) years ago who first introduced me to chilli spices.

And we now have 2 cupboards in our kitchen dedicated to them.

Which is meant to describe that this is the very best spices in a spice shop.

But this spice blend can contain as few as 10 ingredients and as many as 80 spices.

But it’s also sweet because of the nutmeg, cinnamon, and cloves. And it’s not spicy like you might think – just warm. Because of its strong flavours, it makes a great marinade or spice rub for meats, and it’s traditionally used in tajines and stews

This is far off the real deal but passable…

Or try Baharat and then lastly Garam masala (but this is at a push).

I come from a family of potato lovers.

So, grains aren’t my strong point.

And for anyone else out there who is lost in the world of grains.

Then here’s a quick guide to freekeh and how to cook it.

Freekah is green-brown grain, made from durum wheat.

And is often used in soups, stews, salads or even as a stuffing.

The grain cracked to varying degrees of coarseness.

How to cook freekeh

Rinse before and after cooking.

Use cracked as opposed to wholegrain freekeh for a shorter cooking time.

But I have totally cheated in this recipe and bought ‘ready made’ freekeh.

I really hate faffing with grains! 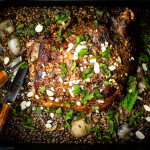