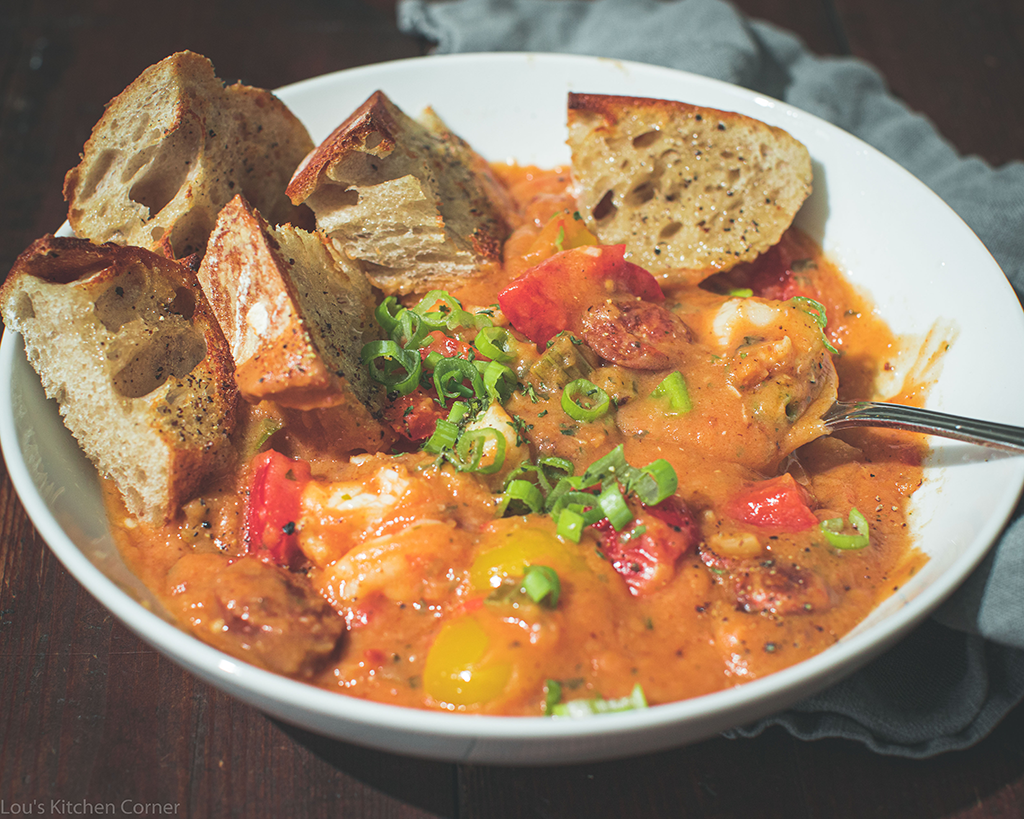 A Louisiana classic to feed any hungry crowd

This sausage & prawn gumbo is a great crowd-pleaser.

COOKING TIME:  1.5 hrs
DIFFICULTY: not too tricky
IDEAL FOR: crowd-pleaser, family
BUDGET: £ – ££ (it depends on what seafood you want to put in)

“Anyway, like I was sayin’, shrimp is the fruit of the sea.

You can barbecue it, boil it, broil it, bake it, saute it.

So, I decided to give shrimp gumbo a whirl.

But what is gumbo??

First things first… what is gumbo?

In a nutshell, it’s a savoury stew made with meats and shellfish and some vegetables and herbs.

And the main difference between a gumbo and a jambalaya is rice.

In a gumbo, you serve rice separately.

But in a jambalaya, the rice goes in the pot, a bit like a paella.

A gumbo is thickened by either using okra, file powder (ground sassafras leaves) or by a roux.

The roux. Key to a good gumbo

So, making gumbo for the first time, I had read about the roux.

And how important it is to be patient and go for a dark roux.

As this adds a deep, rich flavour.

But I will admit, I wasn’t as patient as I had set out to be and only got it as dark as peanut butter.

However, next time, I’ll be more prepared to be patient and get it nice and dark.

A roux is only two ingredients; flour and butter.

But it seems like in the States they use flour and oil.

Which is used in the gumbo roux recipe.

Now, you can see why I quit too early.

Next time I’ll put some tunes on and just enjoy a bit of drifting-off-in-my-own-thoughts while I create a dark roux.

So for the gumbo roux, it needs to have the consistency of dough.

Gumbo is made with the Cajun Holy Trinity.

A bit like mirepoix in French cookery, this is made up of celery, bell pepper, and onion.

This is a special double-smoked sausage that gets used in gumbos.

But I’m not going to lie, they aren’t found easily in butchers or supermarkets.

I had to go online to buy them.

Having said that, you can easily substitute them with spicy Italian sausage or chorizo.

And your sausage & prawn gumbo will still knock it out of the park on taste.

So, the first thing that comes to mind.

Apart from Bubba and Forrest Gump.

And that’s not wrong.

But it’s more complicated than that.

It brings together three separate cultures.

And it’s these three cultures that have created this crazy, tasty dish, in America’s Deep South.

Cajun aka Acadians are an ethnic group mainly living in Louisiana.

The British drove the captured French colony from Acadia (now Nova Scotia) to Louisiana in the 18th century.

So, the roots of gumbo run deep.

I think this dish is a great one for a large gathering.

And, in my opinion, is nice than a paella.

But next time, I will try harder to get that rich dark roux.

And see if it takes it to a new level of flavour. 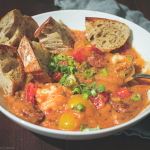