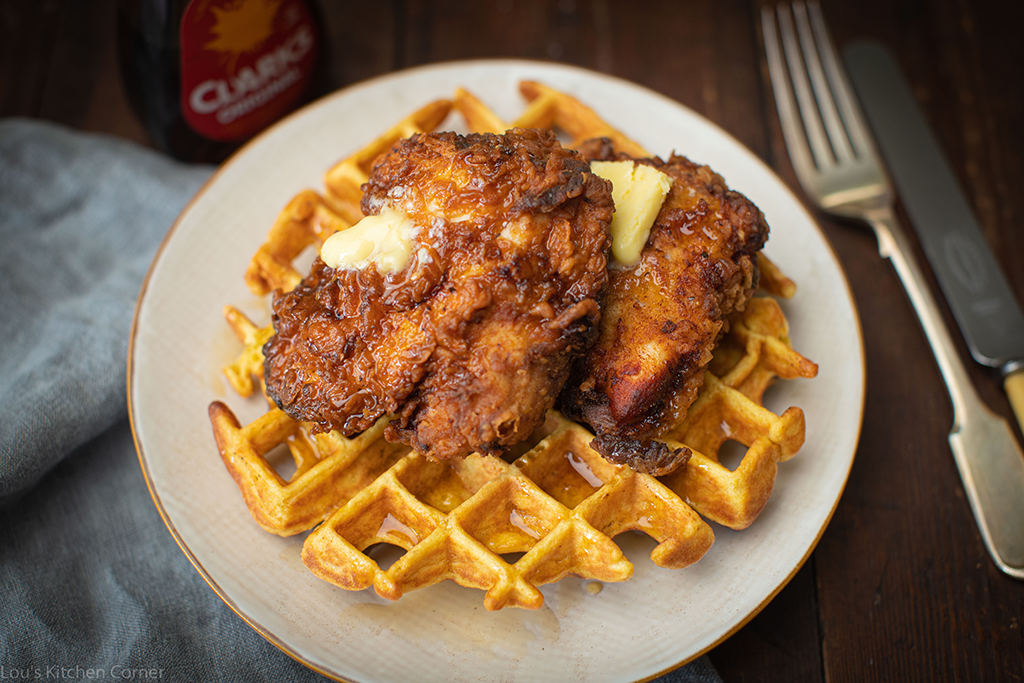 Sweet and savoury, crispy and crunchy

It’s sweet and savoury, crispy and crunchy, and an eruption of flavours.

Chicken and waffles are perfection.

I know and completely understand if the idea of this sounds absolutely wrong.

I was a non-believer too until I tried it.

I have to do a shout-out to my old Aussie colleague, Toby, for the intro to this dish.

We were on what turned out to be our last New York business trip together.

Every year in May, my team and I would set off to Brooklyn to run a B2B show in Retail Supply Chain.

As always, we’d pull off a blinder but it would kill us.

So, we’d always stay for the weekend to enjoy the Big Apple and all it has to offer.

We’d also get pretty sozzled on one of those nights to celebrate the success of the event.

Which is how I ended up eating chicken and waffles.

We stayed in The Jane Hotel, in the West Village (as some may have spotted from previous posts, this is my favourite spot on Manhattan Island).

It’s a very quirky hotel with an interesting history.

Originally built as a hotel for sailors with cabin-like rooms.

Then in 1912, the survivors of the Titanic stayed at the hotel.

Later it was a YMCA and then become renowned for its rock n’roll life-stylers.

The day I converted

It was in the Old Rose restaurant, in The Jane.

And it was here that Tobes and I met after a jovial night on the town.

Not knowing what to order, Toby didn’t hesitate and confidently recommended the “Chicken and Waffles, mate”.

I was a definite No. But then he convinced me.

The spices we the perfect blend. The waffles were light and fluffy and the sweet of maple sauce (has to be maple) just finishes it off.

I’ve never been so happy.

(And it cured our hangovers. Win.)

The origins of the mighty chicken and waffle

The unravelling of food origins which in most cases is near impossible.

I bet, like me, you assumed chicken and waffles originated from the South, a bit of Soul-food-style.

In one line of ‘truth’, Southerners were even aghast at the idea people thought it originated from the South.

Although it probably did, it’s just one or two removed the truly Southern dish.

So, buckle up, here’s the short version of the chicken and waffles’ evolution and how it became what it is, today.

There are those that think it may have originated when Thomas Jefferson brought back a waffle iron from France.

It’s also thought that the dish was created by enslaved Africans who used rice flour batter to make the waffles and serve them with fried chicken.

Next, the German immigrants of the nineteenth century made their version of chicken and waffles.

And they smothered the dish in gravy. It was so good, it became the “gold standard of plantation hospitality”.

Then we move into the 1930s where this Southern-inspired dish finally took shape as we know it today.

It was on the menu of the famous Well’s Supper Club in Harlem, NYC.

Where the likes of Sammy Davis Jr. and Nat King Cole used to hang out after their late-night jazz performances.

And last but not least, in the early 1970s, the chicken and waffle finally made it to restaurants in California.

And the rest is… history.

Chicken and waffles are everywhere; from New York to London, all the way to the bottom of the world in New Zealand.

The dynamic duo is a must-try. 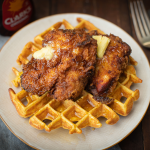