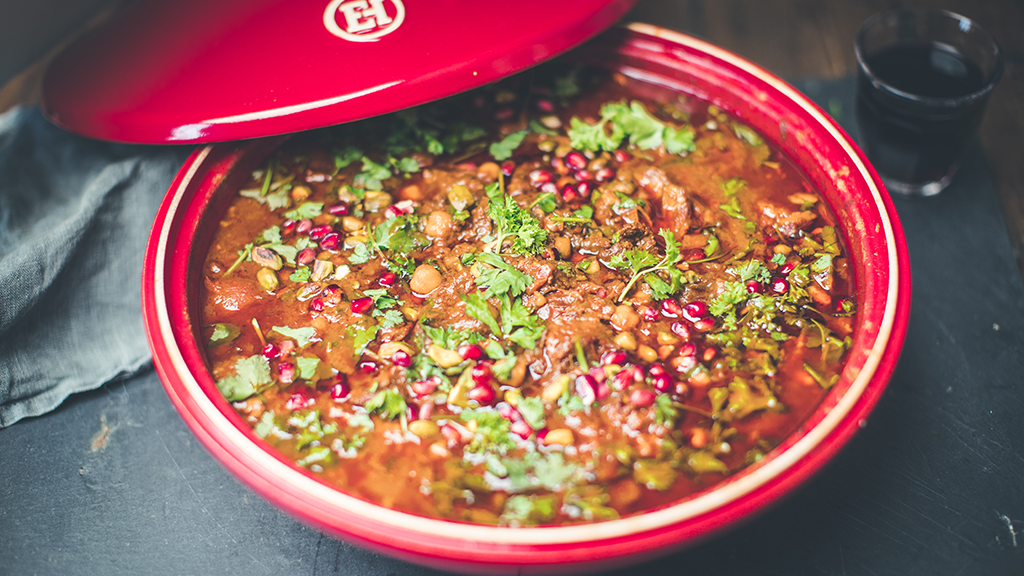 The tagine is core to Moroccan cuisine and culture for hundreds of years.

It’s a type of North African cookware made of clay or ceramic.

It has a fantastic conical shape which you can both cook and serve from and looks impressive sitting in the middle of your table.

Tagine is also the word for the slow-cooked method of cooking.

It’s a bit like the word, casserole, which means both the dish and the cooking method (I mention this in my recipe for chorizo stew).

However, as usual there is a bit of debate about food history and it’s also thought using ceramics in Moroccan cooking came from Roman influence.

The Romans were big on ceramics and were found during their rule of Roman Africa.

Either way, we can now enjoy amazing recipes from this old method of cooking.

The cone-shaped top is all about moisture.

It traps the steam and water goes back into the pot keeping your slow cooked food deliciously moist and helps tenderise cheaper cuts of meat.

The usual suspects are turmeric, cinnamon, saffron, ginger, and cumin.

The Berber tagine is recipe which is all about how the vegetables are arranged artistically in a conical style to hide the meat.

The truth is… you can cook anything you like in these stunning dishes.

You do often need to ‘season’ it.

This basically means you need to prepare your pot for cooking so it doesn’t crack/shatter.

Depending on the tagine you buy, the method of seasoning could differ so read the instructions.

I couldn’t wait to use my new tagine and read the instructions twice to make sure I looked after it.

It was a method I hadn’t heard of but I dutifully followed each step.

I had to fill it halfway with milk (which seemed odd but apparently as its porous, milk helps strengthen it).

A lovely slow-cook recipe from Delicious Magazine. Check out the recipe below.

It was (another) big hit in our household.

It’s only 30 minutes of prep and then leave the tagine to work it’s slow-cooking magic.

It’s another fantastic recipe to whip up while we lead up to Christmas and are running around shopping for gifts and food.

My (wonderful, most days) step-son Frankie, came home from Uni and while having a few beers in our kitchen…

Managed to drop a copper pot on it and smashed my newly purchased beautifully shaped conical lid.

So, you will now see a blue tagine (kept high on a shelf away from Frankie) in my household alongside a ‘new’ red salad dish. 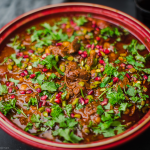