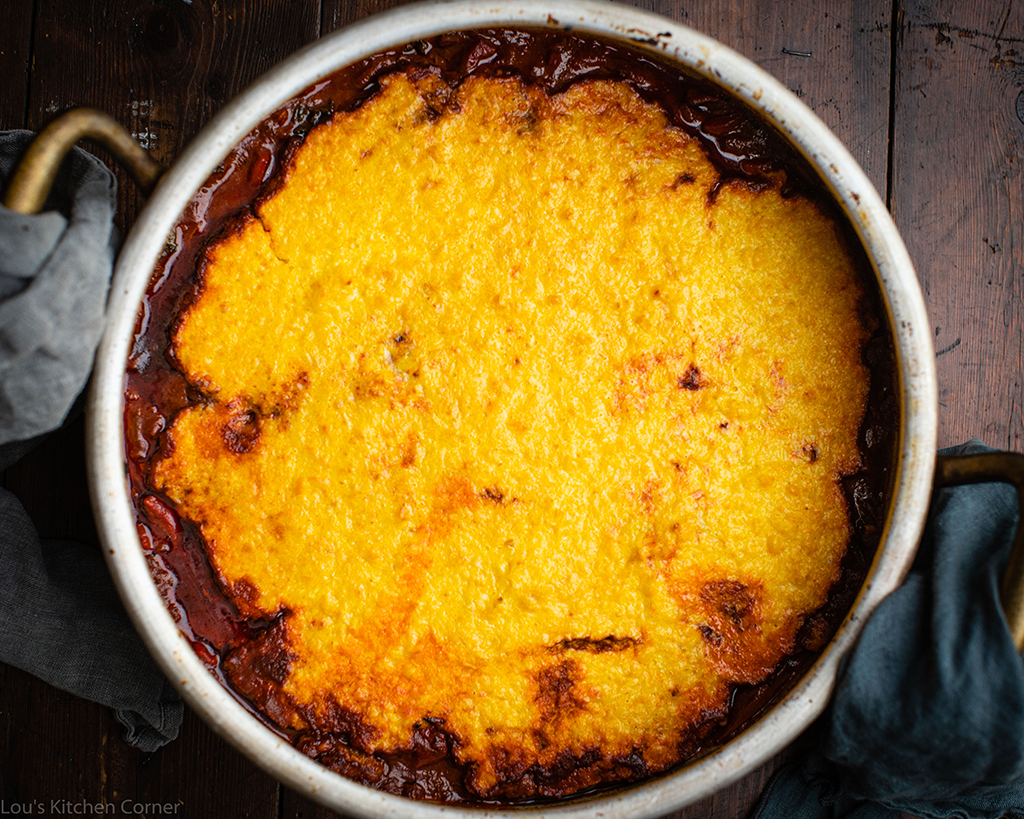 Impress your family with this rich, creamy, one pan dish

This slow-cooked chicken with a crispy corn crust was an absolute winner during staycation.

Times they are a changin’

I used to work on Fashion Street, E1, just by The City (London).

And when we first arrived in our ‘new’ office from Whitechapel, the area was pretty grungy.

On one side we had the famous Brick Lane…

Want a curry, that’s your street.

And I loved it.

We also happened to be sharing our building with the pretty out-there-artists of the time, Tracy Emin and The Chapman Brothers.

(and their cool dogs, one was a black staffie called Kylie, whom I loved)

Back then there was no Shoreditch High Street overground.

It was a bit down and dirty with little surprises of witty, poignant graffiti from an up-and-coming artist… yes, Banksy.

But like any area in London, the hipsters or the city-boys or the farrow-and-ball-gang start moving in.

And before you can blink, the dreaded chains begin to move in.

But there’s always a sweet spot in this transformation.

You’ll get the cool little coffee shop with lovingly made real coffee.

And the pub that was dying or closed, suddenly has a gentle scrub from new owners but they keep it original.

This is the best momnent in time.

You get to know the owners and it feels like a real community.

But this sweet spot never lasts.

Like all great cities, things keep evolving and this area really started to boom.

We started to get craft beers on tap (TBH, I never complained about that evolution).

And incredible new restaurants opening up like Dishoom, The Boundary.

This opened up a lot later on and was nestled down Artillery Passage.

Quietly sitting between The City dwellers.

And the Shoreditch hipsters (that we were becoming – mon dieu).

And it was tasty!

From this experience, a friend bought one of his cookbooks.

And we tried to make some of his delicious salads.

But man, they were complicated.

Until I discovered his Simple cookbook.

And I can’t recommend it highly enough.

The recipes are uncomplicated (although sometimes you may need to track down a spice or mix that isn’t a bog-standard spice).

And they are delicious.

I tried out this slow-cooked chicken with a crispy corn crust during the family staycation.

And even the Gunstone Grandparents raved about it.

Which is a very good ‘thumbs-up’ for any cook.

This slow-cooked chicken is packed full of flavour.

And the crust is a batter which is rich, light… and corny.

But it isn’t heavy because it has no flour in it.

Which is a genius idea instead of having heavy mashed potatoes alongside (or on top).

Or a heavy cornbread crust.

The other fab thing about this recipe.

You can make it in advance… and freeze it if you want.

Then you just make the corn batter on the day and et voila!

Like all great slow-cooking, the chicken thighs will fall apart at the touch of a fork.

And the rich, dark sauce will keep people coming back for more.

This is serious comfort food.

But in my opinion, you can have it at any time of the year.

And your friends and family will be very happy.

PS. if you want another lovely family one-pan chicken dish.

Then check out the deliocus roast chicken, sage and onion traybake 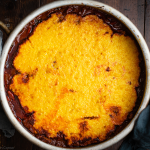