Perfect for Valentines Day… or any other day, TBH

WINE MATCH: Suzie (Michael Sutton’s Cellar), would choose a Cab Sauv to go with a rump cap, as the tannins react favourably with the high-fat content of the meat and will bring out incredible flavours

I can tell you I tried their house wine, Curial Cabernet Sauvignon (only £8.75) with my pan-roasted rump cap and it was the perfect accompaniment.

Maybe if Tim buys me flowers (lol), I’ll push the boat out and whip up a rump cap with a delicious Cabernet from Wente Vineyards (£15.50)… which happens to be close to one of Tim’s favourite surf spots in San Francisco.

Or as my ‘romantic’ husband calls it, ‘Commercial Card Day’.

Which I personally go along with.

But it doesn’t mean we can’t use it as a fantastic excuse to eat and drink well!

Who was St Valentine?

The day gets its name from a famous saint.

Having said that, there are of course, many stories about who he was.

This version about St Valentine explains he was a priest from Rome in the 3rd century AD.

Valentine thought this unfair, so he broke the rules and arranged marriages in secret.

When Claudius found out, Valentine was thrown in jail and sentenced to death.

In jail, he fell in love with the jailer’s daughter.

When he was taken to be killed (Feb 14th) he sent her a love letter signed “from your Valentine”.

How did Valentine’s Day start?

It was ancient Romanian festival, Lupercalia, held in mid-February

It celebrated the coming of spring and fertility rites (with some sacrificial animal rituals to boot).

As part of the celebrations, boys drew names of girls from a box and they’d get married.

Later on, the Church wanted to turn this festival into a Christian celebration and decided to use it to remember St Valentine.

And so, St Valentine’s name started to become used to express feelings of to loved ones.

Which is why, I’ve chosen rump cap (picanha) for a Valentines meal.

How better show your love for someone than with a special homecooked meal.

What is rump cap?

Or depending where you live in the world, it’s called rump cap or sirloin cap.

It’s one of the most flavourful cuts of beef you will find.

And is a relatively cheaper cut.

That will impress your Valentine.

It’s a cut you probably won’t find it at your local supermarket though.

But a good butcher will know this it.

What cut of beef is rump cap

It’s taken from the top of the hindquarter of the cow.

And is usually triangular in shape and surrounded by a thick layer of fat called a fat cap.

How to cook picanha

So, there are a few different methods to try.

But always remember to bring your steak to room temperature and pat dry before you start cooking.

I went for the pan-roasted method.

You only need to season with sea salt (and don’t be scared with this, it can handle the seasoning)

Whichever way you choose to cook it, the taste, texture are stunning.

I also made a  chimichurri sauce to go alongside.

Not only does it taste delicious with rump cap.

But the bright green colours make a fantastic presentation.

After all, it’s Valentines Day.

Let’s not skimp on the detail.

And as mentioned above, match with a nice glass of red,…

Keep it simple and let the steak do the talking.

But a nice drizzle of chimichurri sauce over the steak will be delicious.

And check out some sides, here.

What’s your favourite dish for a special occasion? Leave a comment… 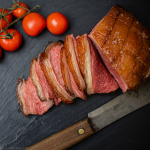