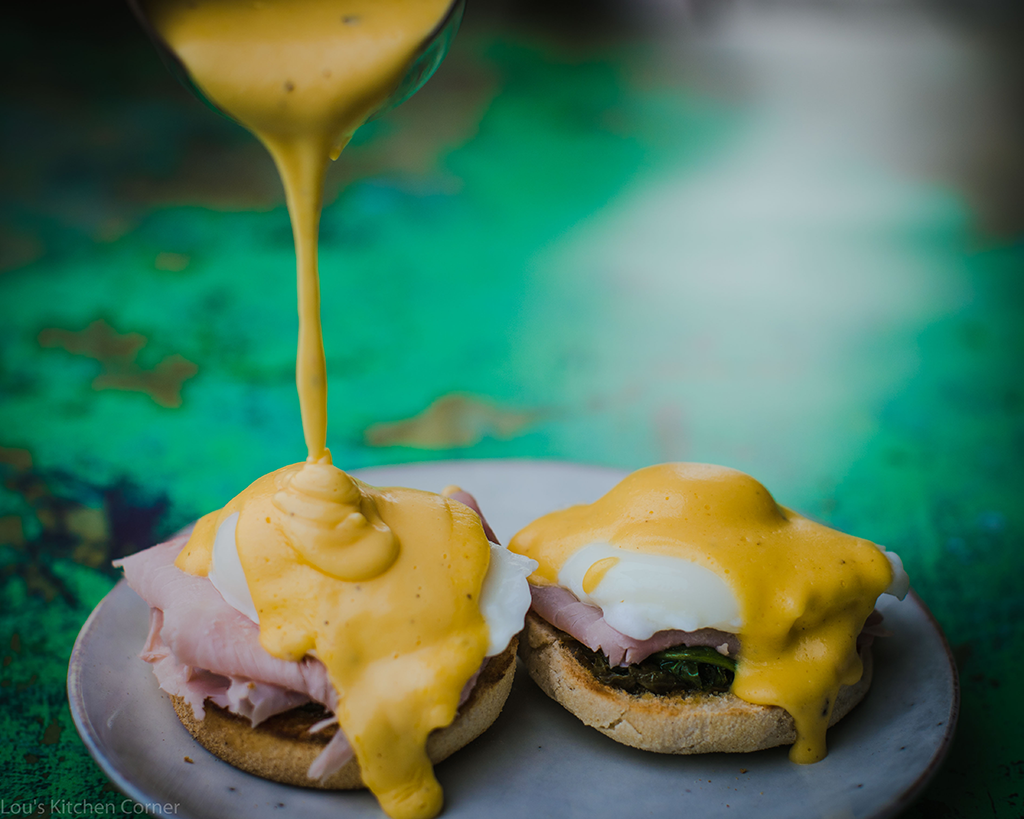 SERVES: 4
PREP TIME: 20 mins
COOKING TIME: 10 mins
DIFFICULTY: not as difficult as you might have worried about
IDEAL FOR: brunch
BUDGET: £

Once you’ve been introduced to Eggs Benedict, it’s impossible to go back.

I fell in love with this delicious, creamy, brunch back in New Zealand.

I was probably about 20yrs old in my first ‘adult’ job.

I felt pretty flush with cash (I wasn’t) and pretty darn grown-up (I wasn’t).

So meeting friends for brunch felt like we’d made it to the next level (whatever that was?).

Ordering Eggs Benedict with a mimosa (or a Bloody Mary)…

(OK, we still went out like we were irresponsible young people (‘cos we were!)

… made us feel like we were independent adults who had important things to discuss and problems to solve and all done over an indulgent brunch.

But we mainly just gossiped about the previous night or got each other to fill in some of the blanks (don’t judge).

But Eggs Benedict was at the heart of our brunches.

They tasted amazing with their rich, silky hollandaise poured over the perfectly poached eggs with that savoury, salty hit from the ham.

But that’s not the original recipe.

That comes from New York City and has its own twists and turns.

It would be nice, just once, to do some research on the origin of a recipe and get a straight answer.

But that’s not the case (again).

So, I’ll dive into another muddy account of who invented a recipe and in this case, the classic Eggs Benedict.

It happened in New York City.

That is an unequivocal fact.

Ok, that’s all I’ve got on hard facts.

So, here are two versions… you pick the one you like the best.

It was invented in the 1860s by a Chef at Delmonico’s Restaurant in Lower Manhattan.

A regular, Mrs LeGrand Benedict, was bored with the menu and asked for something new.

So, the Chef came up with the eggs benedict combo which he named Eggs a la Benedict.

The other legend credits the creation to a NY stockbroker Lemuel Benedict in 1894 at the Waldorf Hotel, Midtown, Manhattan.

Lemuel Benedict was a flamboyant man-about-town from an aristocratic family.

Apparently, one hungover morning at the Waldorf Hotel, he ordered two poached eggs, bacon, buttered toast and a pitcher of hollandaise sauce.

He then built his version of what is now Eggs Benedict.

The maître d’ curious at this, tried it out but substituted ham for bacon and an English muffin for toast.

And the Eggs Benedict was born (in a different story).

Although, sadly this story didn’t stick.

And a distant cousin (after the death of Lemuel) realised that no one had credited Eggs Benedict to his relative, Lemuel Benedict.

But that only to Delmonico’s Restaurant and Mrs LeGrand Benedict.

So, he campaigned until his own death to reinstate the Lemuel Benedict version (which also didn’t work).

Personally, I like this version, it’s far more eccentric.

Substitute the ham for spinach

Substitute the ham for salmon 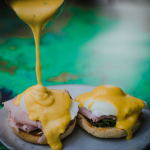