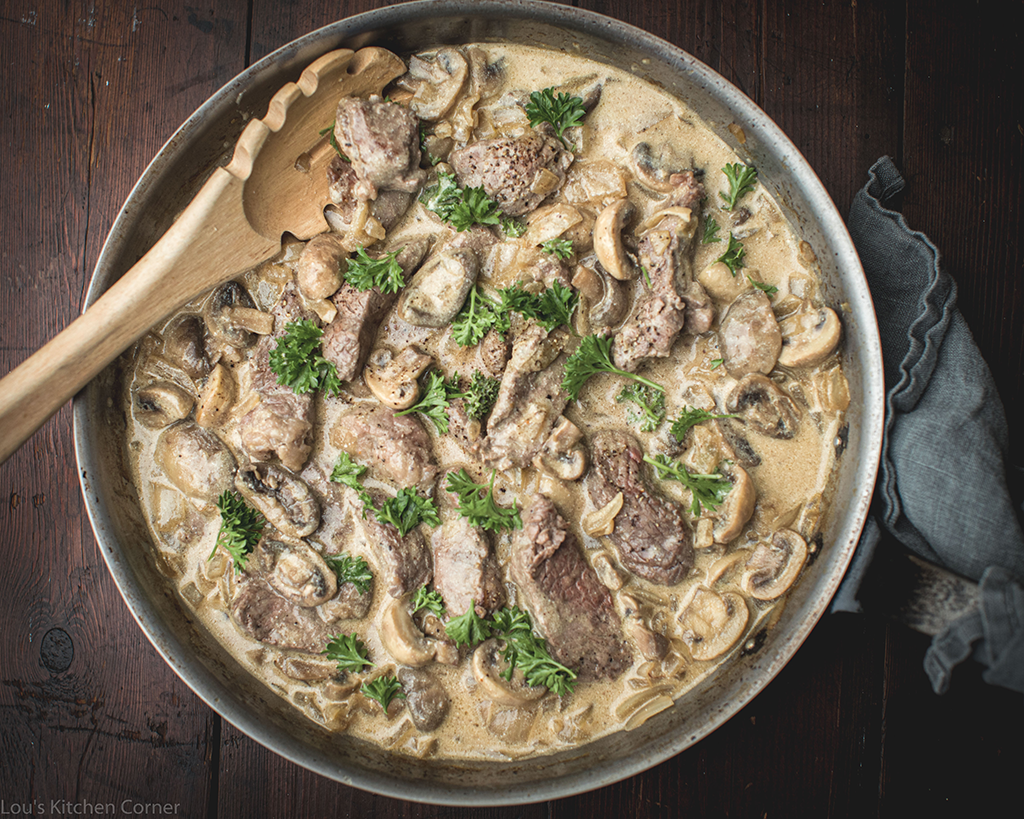 It’s a dish I’ve heard of but never actually cooked.

So, I thought I’d give it a go and it turns out it’s super easy and a great family meal.

The other thing I discovered, is a little bit of interesting history on beef stroganoff.

Obviously, it’s a Russian dish but with a little ‘google’ searching I discovered a few interesting facts.

So, as I always say, some food history can be a little blurry.

And most often it’s been, shall we say ‘developed’ in certain ways to make it more interesting or impressive.

And in the case of beef stroganoff, we have some fuzziness and embellishments.

But then, who wants a boring story to tell over the dinner table anyway??

One fact that is agreed, is that in 1891, a French chef named Charles Briere won a St. Petersburg cooking contest with a dish he called Beef Stroganov.

Although, the dish itself appears in a Russian cookbook in 1871 so he didn’t invent it as some might think.

It’s still unclear which of the Stroganoff family the dish was named.

But it’s often claimed it was inspired by Count Pavel Aleksandrovich Stroganoff, the 18th-century Russian noble.

A dish enjoyed by the rich and powerful

Under the Tsars, the Russian upper class enjoyed a bi-cultural life.

They often split time between Paris and Russia.

They spoke Russian in public but preferred French at home and for social gatherings.

So, beef stroganoff reflected the French-Russian culture of the aristocracy.

Browning the meat and then flavouring with mustard is classically French.

Combined with Russian sour cream for the Russian influence.

And here’s a fun fact…

By the 19th Century, French was no longer the main language by nobles.

But it was still considered the language of money and power.

Even Tolstoy, War and Peace, wrote in both French and Russian.

Apparently to mock the nobles a little for having less French than in the hay day of Russian aristocracy.

Their family roots begin in the 14th Century and grew to become the richest family in Russia.

They made their fortune through salt, timber, fur, iron ore and gold.

And they did a bit of a land grab with Siberia for Ivan the Terrible.

In which he granted them to be long-term landlords of (a good deal).

They also founded schools and churches and built the baroque Stroganoff Palace that is still a St. Petersburg landmark.

Some research says that, many dishes were named after the Russian nobility so this is perhaps how the Stroganoffs really got to have a dish named after them…

They were in the untouchable, elite. Nice for some. lol

I tried this recipe inspired by the Hairy Bikers…

Which seems rather ironic that such a ‘noble’, aristocratic dish, had two Northern lads give me the inspiration to do this recipe.

It’s very simple and if you stay true to the recipe, then the beef is meant to be beef fillet.

Traditionally, the tail end of fillet, which is the cheaper part of this expensive cut but still not that cheap.

So, you can switch it out for sirloin or use a braising steak (it won’t be as melt-in-your-mouth as a fillet but for a midweek meal, it’s still tasty)

If you have any tips or variations for beef stroganoff, leave a comment 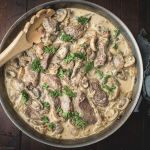