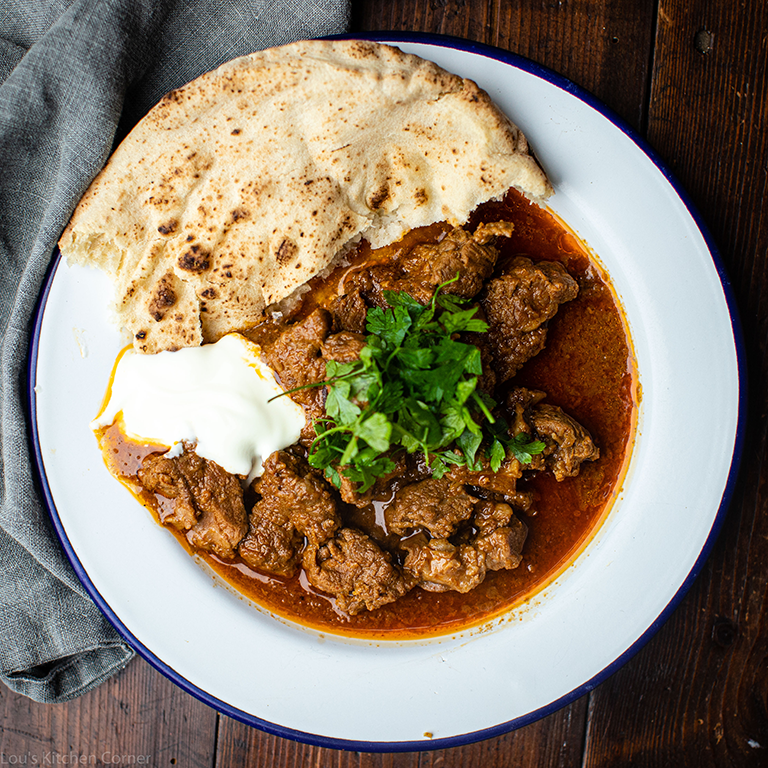 Homemade curry for all the family to enjoy

This homemade Rogan Josh curry is perfect to use an inexpensive lamb neck cut.

Who doesn’t love a curry?!

And Rogan Josh is one of our go-to dishes when we order a curry.

It has wonderfully tender lamb and delicious, aromatic spices sitting in a rich tomato-based sauce.

And it’s not too hot nor too mild.

So, it’s perfect for the whole family to enjoy an Indian curry together.

But is it from India?

Where does it originate?

But to be specific, it was originally brought into Kashmir by the Mughals (or Moguls).

The Mughal Empire was an early modern empire in South Asia.

And this Muslim dynasty of Turkic-Mongol origin ruled most of northern India from the early 16th to the mid-18th century.

They used Kashmir as their winter capital to escape from the suffocating heat.

So, it was this Persian and middle-eastern influence of heavy spices that were brought to Kashmir.

And so, Rogan Josh was born.

But it was yet born in the UK.

Everyone loves a curry in the UK.

But it wasn’t until 1809 that the first Indian establishment opened, called Hindostanee Coffee House.

However, it wasn’t a great success and went bankrupt in 1812.

Then, it wasn’t until 1926 that Indian restaurants became more fashionable.

Which is when the Veeraswamy Indian Restaurant (still open in London) opened its doors.

And just by anyone.

It was opened by the great-grandson of an English General and an Indian Mughal princess.

This opulent restaurant brought in many Royals from around the world.

But it was really only in the early sixties that Indian restaurants boomed in the UK.

And now, we can’t imagine not having access to all these wonderful Indian curries.

…even if a lot of them have been anglicised.

So, Rogan Josh has been around for a very long time.

Unlike Tikka Masala (rated No. curry in the UK), which was invented in the UK in the ‘70’s.

But perhaps you haven’t used lamb neck before?

Think of lamb neck fillet as the Cinderella of lamb cuts.

As it doesn’t often get much attention.

The lamb neck has texture, flavour and very little fat.

And the best part… it’s an inexpensive cut of lamb.

However, it is a tough cut so needs long, slow cooking.

Which is perfect for a Rogan Josh.

I’ve got the neck fillet which is off the bone.

But you can buy it on the bone.

Now, you have the inside on a good lamb cut to use.

Do you have good chat around the table on curry night?

Now, you know where Rogan Josh comes from.

And know to use a lovely inexpensive lamb neck fillet.

Here are some ‘curry facts’ you can hit your family and friends with on curry night.

With your homemade Rogan Josh.

Fancy some other curry night ideas?

Check out my 5 favourite curries, with a twist! 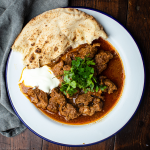